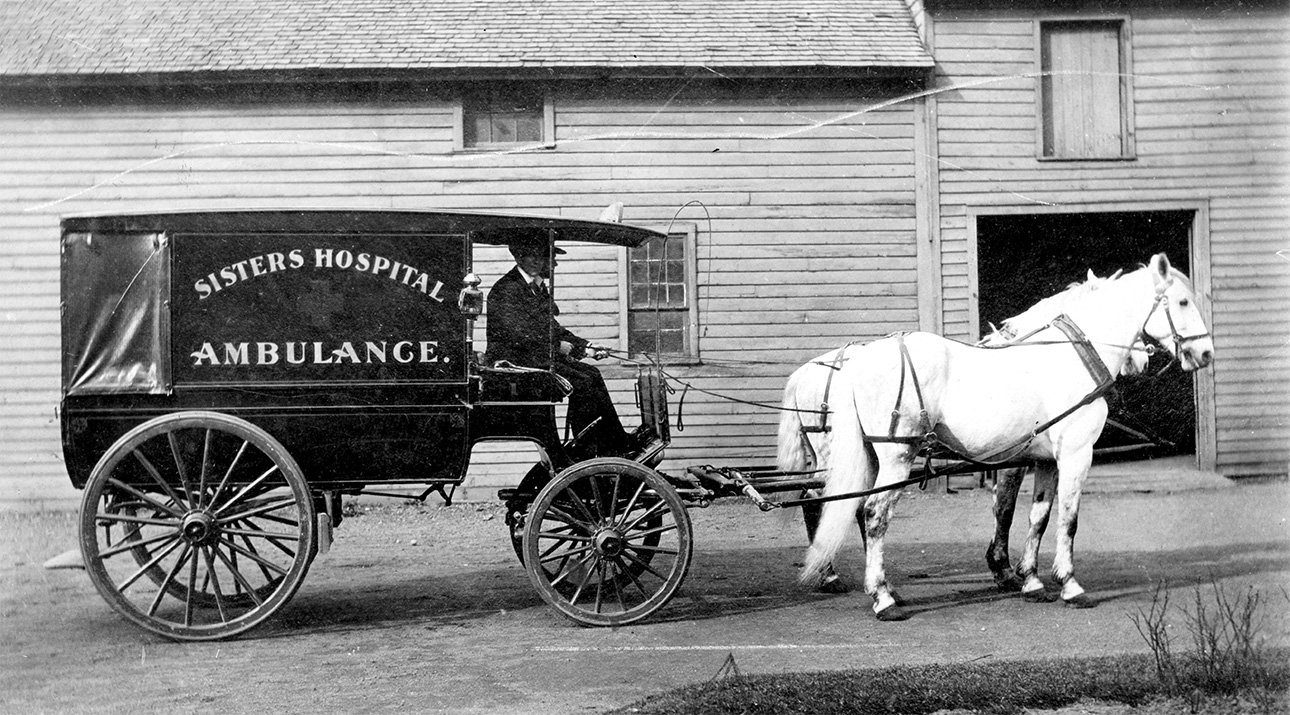 Catholic Health was formed in 1998, at the urging of Bishop Henry J. Mansell, when several hospitals, nursing homes and clinics operated by religious orders, Catholic Charities and the Diocese of Buffalo came together under one organization.

In the years since it has grown to become one of the largest health systems in Western New York, serving hundreds of thousands of patients across its network of hospitals, long-term and subacute care facilities, primary care centers, home care agencies, rehabilitation services, and diagnostic & treatment centers.

With its large network of facilities, Catholic Health continues a healing ministry that dates back more than 165 years.

Kenmore Mercy Hospital opened on October 7, 1951 on a parcel of land bequeathed to the Sisters of Mercy by James Sullivan, a former student of Sr. Mary Bernadine at St. Brigid’s School in Buffalo.

The opening marked the culmination of a vision that began in 1944 when Rev. Timothy Ring, Pastor of St. Paul’s Parish in Kenmore, and Dr. Daniel Stedem, a local physician, met with the Sisters, who sponsored Mercy Hospital in South Buffalo, and asked them to consider building a hospital in Kenmore.

Soon after, Sr. Mary Mechtilde O’Connor, the hospital’s first administrator, moved to Kenmore to begin “friendraising” and fundraising for the proposed hospital.

It was not long after the 100-bed hospital opened that Kenmore Mercy outgrew its six stories and another fundraising effort was launched to build the North and South “Wings of Mercy.” Ground was broken in 1956 and the additions were completed in 1959.

In 1858 Bishop Timon reached out to the Sisters of Mercy for assistance in ministering to the 10,000 Irish immigrants who had arrived in South Buffalo in the past two decades.

The Sisters of Mercy were founded in Ireland in 1831 by Catherine McAuley, a beautiful heiress who gave herself to the church and the care of the poor at the age of 52. Her selfless spirit of comfort infused the young order.

Bishop Timon brought the first four Sisters of Mercy from nearby Rochester to assist with schooling and support at the new St. Brigid’s parish, but they soon saw a clear need for a hospital in the burgeoning community. They opened a 30-bed hospital in a home on Tifft Street in 1904, launching Mercy Hospital of Buffalo, a South Buffalo commitment to community and care now more than a century in the making.

The beginnings of suburbia in Western New York brought the vision and commitment of the Sisters of Mercy to the northtowns with the founding of Kenmore Mercy Hospital in 1951.

A part of the Niagara Community for more than a century, Mount St. Mary's Hospital and Health Center began as the "Little House on the Corner" in Niagara Falls in 1907.

Founded by the Sisters of St. Francis of Williamsville, at the request of the Bishop of Buffalo, the hospital provided services to all, especially the poor. In 1965, a new hospital was opened on a 30 acre campus in Lewiston.

The 1840s was a decade of firsts. Buffalo was a booming transportation hub. Canal and lake shipping were about to be overshadowed by the first railroad route connecting through to the east. The first grain elevator, first university, first elected mayor and first Roman Catholic bishop claimed their roles in the growing town.

Newly appointed Bishop John Timon wasted little time in traveling to Baltimore to request the services of the Sisters of Charity – a religious community of women established in America by Saint Elizabeth Ann Seton – to create the city’s first hospital. Six Sisters returned to Buffalo with him – three for the hospital and three for an asylum and school.

In a former school building at the corner of Pearl and Virginia Streets, Sister Ursula Mattingly (who tackled 22 assignments in 44 years as “one of God’s trouble shooters”) took matters in hand as the first President of the Board of Sisters of Charity Hospital. Chartered as the first regional hospital in October 1848, it was sorely tested by a devastating cholera outbreak in 1849. Sister Ursula’s willingness to take a chance on new therapies resulted in an astounding recovery of 80 of the 134 cholera patients admitted to the small center.

No task, medical or political was beyond her challenge. When the No Nothing Party insisted there be no public payment to religious institutions for public services, she fought alongside her friend Bishop Bernard O’Reilly to win a $9,000 reimbursement from the state legislature.

St. Joseph Hospital in Cheektowaga was opened in 1960 by the Franciscan Sisters of St. Joseph.

Mother Colette Hilbert of Poland founded the Franciscan Sisters of St. Joseph in 1897 and was missioned to Pittsburgh. When the others were recalled to Poland, Mother Colette chose to stay and minister to the growing Polish immigrant population in the United States, eventually settling in Buffalo, primarily to teach in the schools. The ministry grew to include healthcare and social service ministries throughout the U.S. and overseas.

Following the release of New York State’s "Healthcare Facilities in the 21st Century" Report, also known as the Berger Commission, in 2006, St. Joseph Hospital was slated for closure. The decision was later overturned after the State agreed to keep the Cheektowaga hospital open as part of Sisters Hospital.

Father Baker Manor is a 160-bed, residential nursing facility located below Chestnut Ridge Park just south of the village of Orchard Park. The facility opened in 1994 and is dedicated to the memory of Monsignor Nelson Baker.

It originally began as a joint venture between St. Joseph Hospital (now Sisters of Charity Hospital, St. Joseph Campus) of Cheektowaga, Our Lady of Victory Hospital of Lackawanna and Mercy Hospital of Buffalo.

The ground breaking of this facility coincided with the anniversary of Monsignor Baker’s ordination to the priesthood on March 19, 1876.

The nursing home was one of the first in the area erected as part of an existing hospital. In 1976, guided by trends in healthcare, the long-term care facility transitioned to a Medicare-certified skilled nursing facility.

McAuley Residence opened in February of 1993 and is named after the foundress of the Sisters of Mercy, Catherine McAuley.

Just a few miles from the original Mercy Hospital, Father Nelson Baker opened Maternity Hospital to care for the mothers and infants housed at the adjacent Our Lady of Victory Infant Home.

Father Baker was a Civil War veteran and well-established businessman before entering the priesthood. His ever-growing ministry of social and human services was fueled by his faith, courage and business acumen. When his advisors suggested it was necessary to expand the new hospital to the general community, Our Lady of Victory Hospital was born in 1920.

After the hospital became a part of Catholic Health, Our Lady of Victory (OLV) was combined into Mercy Hospital.

Faced with closure in 1999, Catholic Health promised the Lackawanna Community that we would develop a viable re-use of the campus. Research showed the needs of the frail and elderly in the Southtowns were not being met. A comprehensive plan was developed, and the renaissance of the former OLV Hospital began.

The plan included low-to-moderate income apartments, a nursing home, a program of all-inclusive care for the elderly, and community spaces inside and the surrounding outside areas.

In 2008, the facility became the Our Lady of Victory (OLV) senior neighborhood, a comprehensive, state-of-the-art living facility for senior citizens.

Originally established in 1970, Mercy Nursing Facility (MNF) responded to a need within the hospital for patients who had nowhere else to go. These patients had conditions that made them difficult to place in community nursing homes. The initial capacity of the facility was 30 residents.

The facility was expanded twice since 1970, adding 30 additional beds and then another 14 beds. As a hospital-based nursing facility, MNF became part of Catholic Health in 1998.

LIFE is an innovative model of care for elders who require skilled care, but choose to remain in their homes in the community. The LIFE Center was opened in November of 2009 and is housed on the main level of the Neighborhood. Developed by Catholic Health's Continuing Care ministry, the supervisory role of LIFE was transferred to Catholic Health Home Care in 2009.