For the latest updates on COVID-19 vaccine eligibility click here. 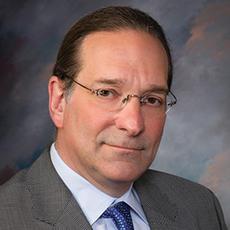 Dr. Guterman has been treating stroke patients in Western New York for 27 years, focusing on catheter based treatment of stroke.

He received his medical degree and completed his residency in general and endovascular neurosurgery at the University at Buffalo. He also co-founded the UB Toshiba Stroke Center and served as co-director.

Dr. Guterman has over 100 publications in the field of neurosurgery and stroke care, holds several medical device patents, and has collaborated with corporate and academic scientists.

Prior to obtaining his medical degree, Dr. Guterman earned a PhD from Clarkson University, where he was an Eastman Kodak Fellow. He also performed research at Woods Hole Marine Biological Laboratory, and was a Fellow at the Barrow Neurological Institute.