To Donate to the COVID-19 Response Funds Click Here. 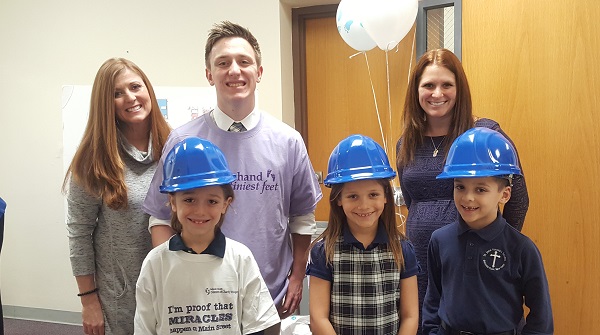 It’s not every day that staff members at the Sisters Hospital Neonatal Intensive Care Unit get to see their patients all grown up, or as grown up as 6-year-olds can be.

But when they do, it’s a wonderful reward.

“It’s really great. It’s very nice to see them again,” said Jane Ellen Agugliaro, a registered nurse who has worked at Sisters for almost 40 years. “It’s just nice to see how they progressed.”

Agugliaro met up with Gabriel and Fiona Lupiani – whom she helped care for in the first weeks of their lives – on Wednesday when they returned to Sisters to present $600 that they received at their birthday party instead of presents.

It was a thank-you from the two youngsters, who are doing fine. They dance ballet and hip-hop, practice tae kwon do, and attend kindergarten at St. John Vianny School in Orchard Park.

But they had a rough start, being born 11 weeks early. Gabriel was 3 pounds, 7 ounces, and Fiona was 2 pounds, 7 ounces. Today, Fiona is the taller of the two and has 10 pounds on her brother. Gabriel was in the unit, or NICU, for 47 days, and Fiona spent 63 days there. Both had underdeveloped lungs and other complications, including necrotizing enterocolitis for Gabriel, while Fiona had a brain bleed and a hole in her heart.

The family’s journey started when Amy Lupiani, of Orchard Park, went into labor when she was 26 weeks pregnant. Nurses suggested that she and her husband finalize names for the twins.

“She was on the gurney to be taken on for the C-section. The contractions just wouldn’t stop,” said Scott Lupiani, of West Seneca.

When the couple talked about middle names, they decided to name Fiona using a combination of their grandmothers’ names, Lucy and Nancy.

“It sounds like it should be in a movie. When we picked the name Luna, the contractions stopped,” Scott Lupiani said. “Luckily enough, that probably saved Fiona’s life.”

“I think the magnesium sulfate helped with that,” Amy Lupiani said, adding that she stayed in the hospital and that the children were born about three weeks later.

Asking for donations for the Sisters Hospital Foundation was her idea, but the children didn’t mind.

“We’ve been trying to emphasize good character in them, and they are very fortunate with all the things we have at home,” Amy Lupiani said.

“We decided that instead of having their friends bring piles of birthday presents to their sixth birthday party, they would collect money for the hospital that gave them life.”

“A family like this was here for two months,” Dukarm said, “so, really, we cared for them every single hour of every single day for the first two months of their lives.”